When I was a kid, I saw a Chef Boyardee commercial on TV, with a child on the screen, happily devouring some stringy orange noodles. The commercial made it look so appetizing, I followed my mom to the store the next day and bought a few cans. This was my first introduction to spaghetti: soft and mushy pasta, orange tomato sauce, and little pieces of processed beef. I was more than just disappointed, I felt lied to by the advertisers who made this stuff look good. Yet all my friends at school loved spaghetti! How could it be? I knew there had to be something better out there.

I bought every different spaghetti product I could find. Kraft’s Tangy Italian Spaghetti kit in a box (Tomato Paste Not Included), Anthony’s spaghetti noodles with Ragu, Creamette spaghetti with Prego…they were all mediocre at best. I finally had my first good spaghetti experience at a mom and pop restaurant in LA called Andre’s – it’s still there, across the street from the Farmer’s Market on 3rd – but that didn’t stop my quest. One day I went to an Italian market and bought some pasta imported from Italy (the kind wrapped in blue butcher paper), and on a shelf in the back, I found what became my epiphany sauce: Rao’s Marinara Sauce, made with imported San Marzano tomatoes (canned), olive oil, and a handful of fresh basil. It immediately became my go-to spaghetti sauce.

My goal was to capture the delicious flavors of the Raos sauce, but using fresh tomatoes. I think you’ll find this an easy recipe to follow along with. Just make sure you set aside 1 and 1/2 hours; one hour of that time will be spent roasting the tomatoes in the oven.

2. Wash the tomatoes and dry completely with paper towel. Add the tomatoes in an small oven-proof casserole pan, add the olive oil, and salt. Toss well. 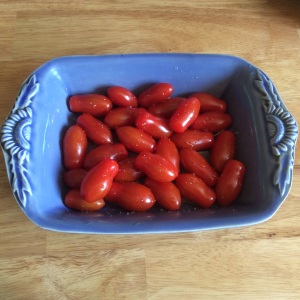 3. Roast the tomatoes for 30 minutes.

4. Take the tomatoes out of the oven, toss in the sliced garlic, and put it back in the oven for 30 more minutes.

5. While the tomatoes continue roasting, get a large pot of water to boil. Add a handful of Kosher salt.

6. Remove the tomatoes out of the oven. Immediately, toss in the small basil. Let rest until the tomatoes are cool enough to handle. 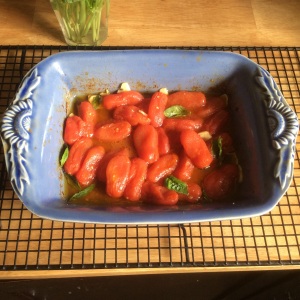 7. Add the pasta to the boiling water. Cook until al dente.

8. While the pasta is cooking, peel the skins off the tomatoes. The skins will slip right off. Throw the skins away.

11. Divide the pasta into 2 serving bowls.

13. Serve with a glass of Italian red wine and enjoy!